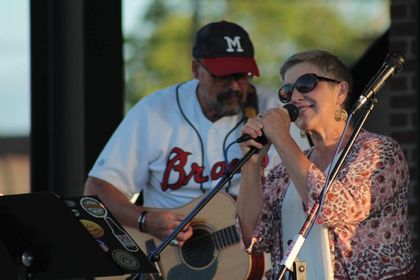 First Avenue in Eau Claire Wisconsin is within walking distance of the campus of U.W. Eau Claire as well as some of the city’s finer (ahem, cheaper) taverns, making it a prime location for a group of coeds to live. It also abuts Owen Park, a fine place for a young man to play guitar and perhaps catch the attention of the previously mentioned coeds.  Lo and behold, proximity worked his magic, and on First Avenue, guitarist Tim Krogman met vocalist Renee Thompson. Their story only began on First Avenue, and they went on to live on many other streets before settling in Stevens Point, raising a family, and playing with different bands over the years.
Active in the Stevens Point music scene, Tim spun records for 90fm’s ‘Acoustic Revival’ before recruiting some friends, including Renee, to play with Grandad & Friends.  While the lineup has changed, Tim and Renee found a partnership in both music and marriage that was made to last.  They added elements and put on a good show throughout the state, but around 2011, the grind had gotten to be too much.  But they knew the basics were good.  The beating heart of their love for music and performing included one another.  So along with their back to basics sound, they decided to name the band after the place it all began, First Avenue.
Like two young kids falling in love, the world seems simple and big and and perfect and scary and vulnerable and joyous at the same time.  That feeling isn’t summed up in complicated arrangements or synth fills or a horn section.  This music doesn’t need a semi truck loaded with electronics.  Everything they need fits in a Dodge Caravan. Performing both covers and originals from left, right, and center of the dial, it’s a sound and style that has delighted audiences all over Wisconsin.
So when you listen to this duo, you’ll be sure to get a back to basics sound that exudes love, passion and camaraderie. It’s a feeling that gets passed on to audiences at every venue they play.
Please see their website for more information:
​https://www.firstavenueacoustic.com/?fbclid=IwAR3CJyI7z9KFay4rWelfgNZO1RQIqBITRM-siaUddSzsDP3N0eZtpZvBunE